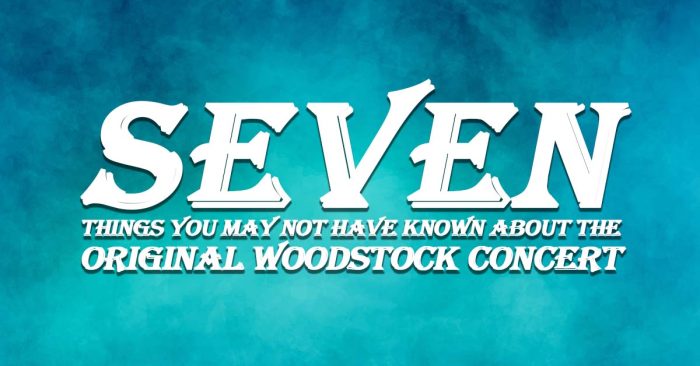 You likely knew The Woodstock Music & Arts Festival took place in 1969 in Upstate New York and turned into an iconic event. Not only did it become a legendary music festival, it resulted in a classic film and best-selling album. You may have heard on how crowds descended upon the concert site. You may even have seen clips of Jimi Hendrix, The Who, Santana and others performing at the event. Here, however, are seven aspects of the performance you may not have been aware of.

Original ticket prices for the Woodstock Music Festival were $18 when purchased at New York area record stores or in advance through the mail. Event organizers had planned to charge $24 at the door, but overwhelming crowds changed those plans. That $24 would translate to about $150 in today’s money, not bad fort a four-day festival featuring over 30 performers.

Many think that Jimi Henrix’s rendition of the National Anthem kicked off Woodstock, but he and his band were actually the last to perform. Although scheduled to appear Sunday night, Hendrix didn’t perform until Monday morning at 9am. Most of the crowd was long gone and missed his performance.

Havens opened Woodstock, taking the stage at 5:07 pm on Friday afternoon, August 15, 1969. Because so many performers were stuck in traffic, Havens had to play a very extended set, ultimately playing every tune he knew.

While hundreds of thousands attended the original Woodstock, estimates place arrests at the event at between 80 and 120. Most of these were for more serious drugs than marijuana and far more were arrested on the way to and from the event than at the concert itself.

Because of the huge crowds, food shortages were rampant at Woodstock 1969. The unexpected hero of the day was granola. It has kind of led to an interesting “chicken or the egg” debate when it comes to hippie snacks.

6. Turn Downs, No Shows and Cancellations

Performers who either turned down offers to appear, canceled or just didn’t show up include Poco, Led Zepplin, Jethro Tull, Rod Stewart, Iron Butterfly, Chicago and others.

7. You Can Still Visit

You can still visit the rolling hills that once served as the site for the original Woodstock in Bethel, New York. The site also plays host to the Woodstock Museum at Bethel Woods Center for the Arts.

It may be hard to imagine but just about everyone who attended Woodstock is at or past retirement age. Life rolls on, and it is worth protecting your assets along the way. We can help with life, business, auto and home insurance. Get your free quote by contacting us today.