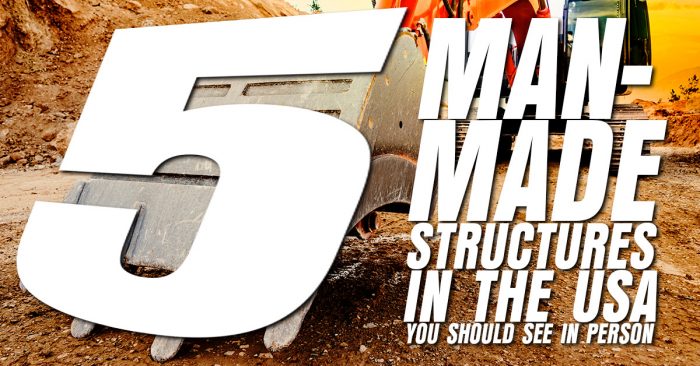 You can read about them, see documentaries about their construction and view tens of thousands of photos but there is still nothing like seeing and experiencing them in person. Here are five great American structures you need to visit in person.

This stunning piece of engineering and art sits beside the Mississippi River in Downtown St. Louis and represents the area as the the Gateway to the West. The arch is actually a part of a National Park and visitors can ride a tram built inside the structure to the top for some incredible views both to the east and west. It is the country’s tallest monument at 630 feet. The top of the arch is designed “flex” up to 18 inches but generally does not move. In a 50 mile per hour wind it will only sway about an inch and a half.

While technically the mountain is not manmade, the sculptures of the four presidents it features are. Located in the Black Hills of South Dakota, Mount Rushmore was designed to be a tourist attraction for the remote region. It worked, as about 2.5 million visitors each year make a visit to see the granite images of Teddy Roosevelt, Thomas Jefferson, Abraham Lincoln and George Washington.

One of the great engineering achievements in our history, the Golden Gate Bridge crosses a 3-mile section of the strait between the San Francisco Bay and the Pacific Ocean. Bridge construction started in 1933 and it took four years to complete. In spite of its name, it is actually orange and is said to be the most photographed bridge in the world.

Any trip to Las Vegas deserves a trip to the Hoover Dam, just 30 miles Southeast of the city on the Nevada-Arizona border. One can’t help but be impressed with the size and amount of concrete it took to build what was originally named the Boulder Dam. Besides an amazing feat of engineering, it serves multiple practical purposes including flood prevention, irrigation, hydroelectric power and a major recreational area.

Because of lack of funding, the Washington Monument took almost forty years to complete. Since its opening in 1847 it has served as a landmark for not only the city of Washington DC, but the nation. The marble obelisk stands at 555 feet and was constructed as a tribute to the Father of Our Country, George Washington.

These are five structures that are “bucket-list” worthy for any American.