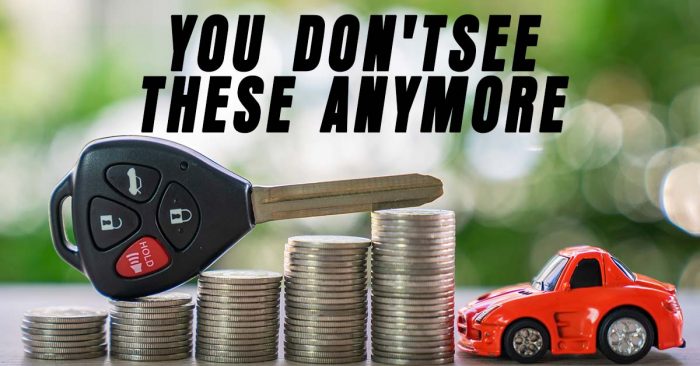 There was a time from the 1950s through the 1980s that virtually any business involved in the car industry would hand out promotional items to get their names into the public and build their reputations. It was almost impossible to walk or drive into and automobile related business and not get some sort of free trinket. Here’s a look at some of the items you rare see anymore.

Key-chains were useful, inexpensive, and available in a whole assortment of designs for companies to use as giveaways. Traditional keys for cars, and even smart-houses are becoming more rare, so key-chains have largely lost their luster for both consumers and companies.

Road maps were a huge promotional item for oil companies at their branded gas stations. The nearly impossible to re-fold properly large paper maps often noted the location of the oil company’s stations on them. It was not uncommon for a car to have its glove compartment filled with maps from assorted cities, states and regions across the country. Except, of course, where you were going.

As we became increasingly conscious of how unsightly litter was becoming on our roads in the 1970s, litter bags became a popular promotion item. These were simply slightly heavier than average plastic bags that hung from one of a car’s knobs on its dashboard, most frequently a cigarette lighter. Now, rather than the roads being littered, the interior of our front seats became unsightly with these litter bags hanging from the dash. Today’s vehicles may have 6 or 8 cup holders but not a single trash bin.

Almost every car related company printed advertising on matchbooks in their heyday, but then people started smoking less and disposable lighters became super inexpensive. Now it is hard to even find a book of matches.

Tire companies gave out ashtrays that looked like tires and other ashtrays were made of aluminum or glass in a whole host of designs. Usually printed smack dab in the middle would be the companies logo and contact information. Eventually companies learned to associate themselves with smoking was probably not the best idea.

Picture postcards were particularly popular as promotional giveaways at motels, where the motel itself was usually pictured on the front. For a few cents, Grandma or Aunt Martha could send a card home, while promoting the motels luxuries like air condition and free TV.

The need for affordable automobile insurance will likely never change. If you aren’t sure whether you are paying more than you should, contact one of our independent auto insurance experts. You can get a no obligation quote with a quick phone call. You may not get a book of matches or even a free calendar, but you will get a valuable quote that just may save you money!

What Are The Odds?

The Things That Protect You When Driving

How to Handle Requests for Donations

Discovering More About The World Around Us

Nine Inexpensive Tips To Get Your Home Ready to Sell

Tools We Don’t Seem to Use In Business Anymore